Working with images in Gatsby

Working with images is boring. If you were to include an image on a website, you have to assure:

Thankfully, Gatsby offers some nice utilities, bundling all the steps required into a single tool-chain, letting us focus on other things.

To use GraphQL or not?

Up to recently, if you didn't want to go the GraphQL route, you were all out of luck. Thankfully, now it's possible with the help of the StaticImage component. But let's take a step back for a moment.

Gatsby is a fantastic framework if you want to consume data from various remote sources. Fetch the data (instagram, wordpress, etc), push them into the GraphQL layer, and populate your pages based on that data. To help with the images that these sources include, the Gatsby team & collaborators added a set of utilities to optimize them. But for everything outside the GraphQL layer, there wasn't anything.

That resulted in an unnecessary boilerplate. If you had a simple local image but wanted a cool blur effect, you had to go through GraphQL. That said, with the latest gatsby-plugin-image we have the solution, and we can safely go one way or the other depending on the use case.

If your images don't go through the Gatsby GraphQL layer, you can use StaticImage

The same configuration object that we declare in the GraphQL schema, can be passed as props. Rejoice.

First of all, we need to ensure we have all the dependencies in place.

We need 4 plugins before we start:

Now, this is where it gets interesting - we can have three types of responsive images.

Ok, this might be confusing. The difference between FULL_WIDTH & CONSTRAINED can be seen in the following table. The FULL_WIDTH image will expand to fill its container, even if it looks blurred.

So assuming we want a CONSTRAINED image and we don't want image copies bigger than 200px, here's our query.

This setting will make sure to include copies for both jpg and webp, even if we don't specifically request for the latter.

Everything is in order, but we probably want a smooth fallback. Here are our options:

Here are the first three options side to side. I tend to prefer the first two.

Gatsby allows us to do some transforms too:

Frankly, Gatsby is a bit notorious for its build times, so I would advise to do a pre-processing to avoid transforming the same images again and again. If that's not possible, this option is for you.

Contrary to the StaticImage example, GatsbyImage accepts an image prop.

Now writing album.cover.childImageSharp.gatsbyImageData is a bit tedious, so we can import getImage from the very same package, and refactor it as follows:

You probably want to fetch the images dynamically, as part of another entity. The best way for that is to link the images with the rest of the metadata. Here's an example from my blog.

And the call with the rest of the metadata

Unfortunately, gatsby-plugin-image doesn't help with markdown files. We can optimize any images we query along with our data, but the images which are referenced inside the markdown file, won't be touched.

In order to do this, we have to include a separate plugin gatsby-remark-images. Now to keep things tidy, I like to keep my blog images near the markdown file, and copy them over with gatsby-remark-copy-linked-files.

Here's how it looks 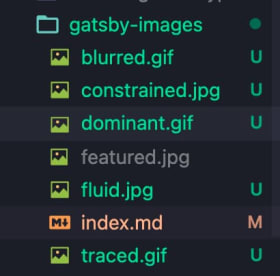 And here how it's written

Now having installed the plugins, we add some basic options and we're ready to go.

Not as polished as the gatsby-plugin-image, but it does the trick.

At the time of writing gatsby-plugin-image is still in beta. That said, I'm using it because life is too short to not live on the edge.

If you want to follow the official documentation, you can find it here

Next up: "How I load my web fonts in Gatsby"
Previous: "What is a Front-end Developer anyway?"
Back to Blog